During the first 4 weeks of the release EU Central suffered from matchmaking problems where 90% of your time trying to do group content was spent getting matchmaking errors.

Now on EU west, 90% of your time trying to do group content is trying to find enough people to form a group.

The incentives for EU Central players to restart on EU West were way too low to convince people who invested any amount of time on the game already. And now the newer players who were forced to begin playing on EU West due to central servers being full until the bot bans are paying the price with a rapidly dying region.

Here is a comparison of the group finder difference between the 2 regions: 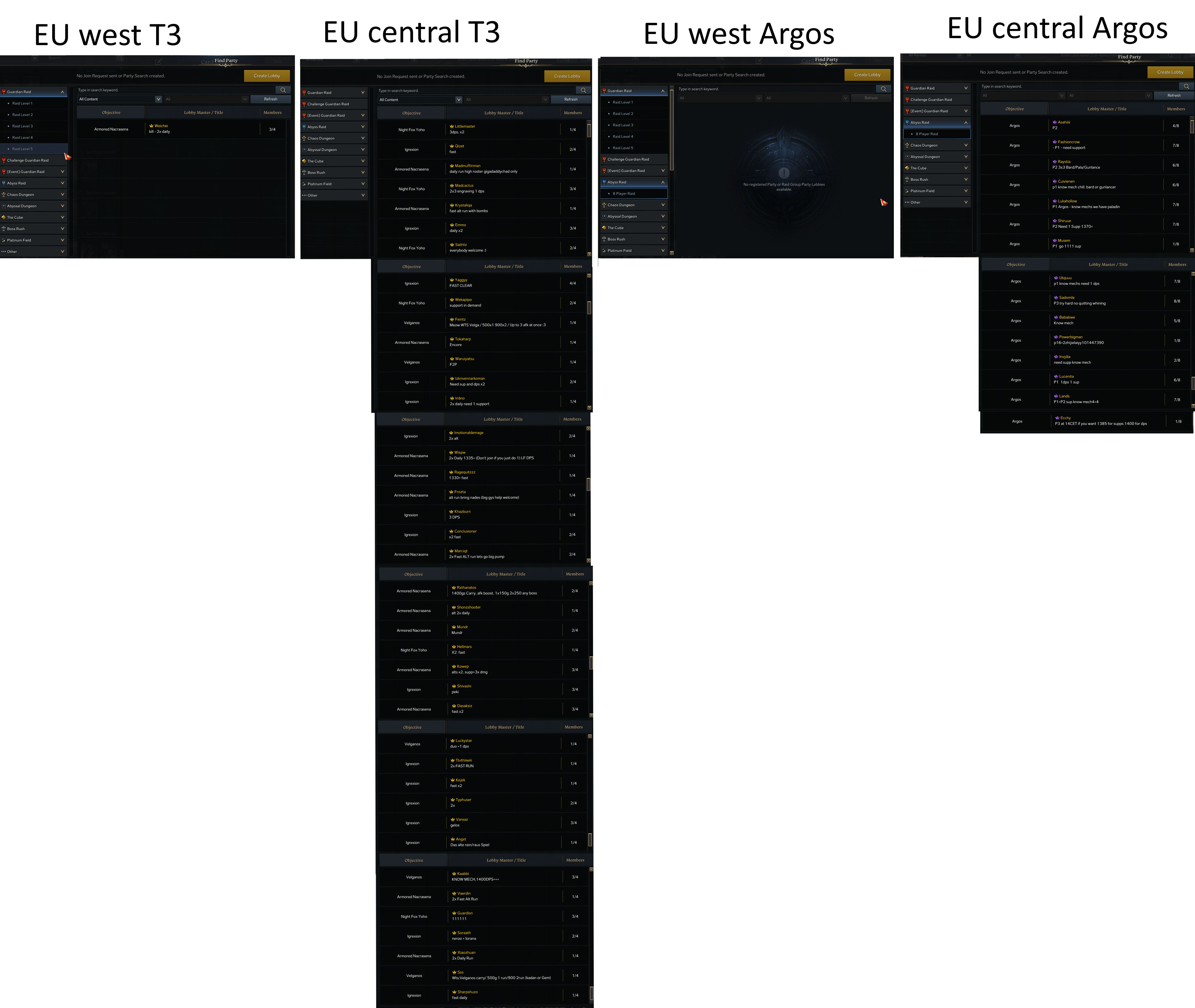 Comparing other tiers has the same results. With EU West having 0-2 groups in every category and EU Central having 15+

Since AGS failed to provide any reason for EU players to play on EU West aside from locking EU central completely for new accounts it now needs to be up to them to fix this situation by merging the regions into one.

Sadly it has been said multiple times they can’t transfer or merge servers. Also they won’t take any more responsibility than what they did, providing another region after people asked for more servers because of the long Queues.

anyone smart enough to know what will happen said “dont transfer to eu west. just wait. the region will die out once the hypetrain dies down” my guild lead is streaming and we told every single viewer that came in. “just be patient and wait-dont move to eu west, if it at all play on both regions” . guess what we’ve seen it before it happened

AGS locked the EU central servers for new players so they had no choice except to play on EU West.

they had a choice “wait 2-3 weeks”
i know people were eager to play. but if u joined late. you started late allready. now some servers must feel realy dead. while eu central has a relatively stable playerbase

That’s not really a realistic solution for anybody.

The lock lasted a few hours. That’s why the servers got overpopulated. West only came later.

That’s not really a realistic solution for anybody.

yet everyone knew beforehand that server transfers are impossible currently. they said it! in the post where they announced eu west

Besides, why blame players for a problem created by AGS?

true. AGS didnt expect the flood of players that tried the game. but they tried to push servers to the upper end of stable gameplay. and it was real tough. yet we all knew that eu west was a “temporary solution” to give people the ability to enjoy lost ark. And they did. And just as expected many people quit. you cant realy blame AGS for people quiting. thats on the players

AGS can maintain those players by not giving them such a horrible experience on EU West and developing the systems needed to allow the regions to be merged.

even the koreans are “beta” testing their server transfers right now. the have the game for multiple years and they still dont have it. but you all of a sudden need it. im not saying ur wrong. but we’re still way in the early stages into lost arks endgame content. You can infact STILL change servers. and catch up in due time. We will be sitting at 1370 for a while. and with your current knowledge, you should be progressing at a far higher pace from 0 - to t3

So currently noone but you is holding yourself hostage

Said the same to my Friends and my Viewers.

It was so foreseeable EU West will dry out.

This is not a helpful solution to anyone because investing time into another roster means that when server transfers are eventually possible, you will have 2 separate rosters where you can’t take advantage of your own unlocks.

we’re talking about possibly a year or more until we even have a server transfer. if not longer / at all!

Theres no threat. no comment that ever said “server transfer will come,// be patient” so dont count on it!

Also telling people to just start over on EU Central just makes the situation EVEN WORSE for people on EU west.

This is a problem only AGS can fix.

they cant. and they said it before. no migrations / transfers possible in the forseeable future. did you read any news posts/blueposts at all?

They have the option to invest resources into making this a possible solution.

Every other thing that’s being suggested here just leads to people quitting and amazon losing customers.

So unless your goal is to have more people quit the game, telling people to start over does not accomplish anything.

ahhh so people moving from euC to euW to skip qeue was a solution. but coming back now when the hype drops isn’t

i just learned something new.