Your engravings are badge,

I dont see any info if you have skillpotions done(sadly wardancer need them)
Eso 1 vs eso 3 is 16% dmg on 2 skills so it is pointless to run eso 3.
Throw your tornado as last spender with 1400 swiftness and mass increase with no attack speed tripod on whisper your last ticks of tornado wont be in whisper window what is DPS loss.

ALSO dont ignore your big burst of dmg from energy combustion You should always aim for it to be in Whisper window.

Really strange, i do more than 1M with my 1415 wardancer, in both spec.

As I saied it’s totally possible with this combo, the 2 eso are inside wind/roar so yeah I agree with you and you can do it on vykas too, or others boss when they use attack that take them longer to move, this combo is the most optimal, and deal really big damage. but you need good apm and good cooldown reduction. But as I said too, if you don’t have the time with a a boss that move or you don’t have yet good enough cooldown or apm then yes dont try it and juste use 0 or 1 or maybe 2 skill between the 2 eso skills (depend on your apm and cooldown and boss mouvment) the purpose is to have the 2 eso inside the wind/roar. It’s situational like every combo 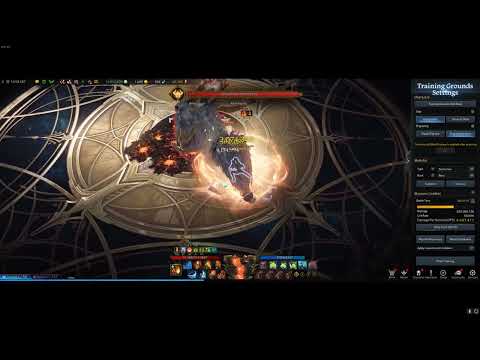 In this video, I don’t know who is he, this player use an optimal combo for “HIS” build (depend on your build, your cooldown, your orb generation).

and he can go on like this forever without breaks.

As you can see all the cooldown are almost perfect he just need to click, each skills come out one after the other in the right order while generating enough orbs. This is the effect you should be looking for.

He seems to have 4 pieces dominion set + 2 ARGOS. engravings are listed in the description
But it’s not perfect because he has 3 min cooldown for his awak and the buff duration for dominion is 2min. But he don’t really use the dominion buff in this video, just one time.

wardancer stacks swiftness and ww buff gives attack speed, even more with as tripod, supports with yearning set also give as, dont troll people if you dont know the class.

Wardancer FAQ and Builds - Google Docs that’s all you need for wardancer.

But it’s not perfect because he has 3 min cooldown for his awak and the buff duration for dominion is 2min.

yeah but making relic accs setup to get 4x3 is trolling, you will have to switch for brelshaza/clown. otherwise its waste of pheons. he should aim for 4x3 1x2 1x1 or 4x3, 1x1 1x1. I was saying about ur engraving setup for him. I suggest buying RC/MI leg books if he plays Swift classes.

Idk what u are doing wrong my 1450 wardancer reaches for 1,6 in Trixion only having 2 piece dominion and argos

So my main “was” wardancer. I liked the class too, however the way it works as a class, especially if youre trying to max out damage potential, falls off in harder content and your dps falls off as well. The problem is you have to always auto attack while using skills, on top of avoiding mechanics and moving around to the back of the boss. The only reason you would ever get mvp is if everyone else in your party is a worse player than you, around same ilvl. Potentially it has some of the highest damage ceilings, but you have to auto attack with like 90% uptime on auto attacks because they make up a significant amount of your overall dps, and this can prove difficult depending on the fight. Scrapper is now my main dps, because its so simple and i dont have to worry about burst or auto attacks, i can go in to deal damage and go back out to avoid mechanics without relying on certain skills or combos, and my dps as scrapper is better than wardancer in harder content because of how easy it is to deal its damage. Only real advice i can give is to keep auto attacking while using skills, other than that, you might want to change mains now because the buffs arent heavily valued like it is in korea.

@norele, i know that a lot of ppl do their best to help you out here, but its not as good as this. this link zoro.posted is the wardancer bible. Like you cant find a better and more detailed explanation then this. Its ppl from kr that theory crafted this class for years and even translated kr wd theories. You can easly find more info by joining the unofficial discord, get the WD pin. The one of the few good channels there with up to date info

I must sera the guide. I don’t know what Is wrong with my WD. And really thank you all for the help!! I’ve to understand the problem because is really strange

Wardancer FAQ and Builds - Google Docs that’s all you need for wardancer.

This guide is fantastic. I pulled 1.5mil dps over 2 min in Trixion as a 1430 Esoteric Wardancer with just Argos set and no level 4 tripods. Wardancer is amazing but it’s very dependent on how you use your abilities. One of the most difficult DPS to min/max, especially in a raid setting.

that’s all you need for wardancer.

Are you involved in it?

I’m actually curious it doesn’t go more into KBW for Esoteric besides a throwaway line with the removal of Wind Whisper’s crit.

It’s interesting to me because if you reference Wardancers in Korea even down to 1460, they’re running KBW.

As such, it can’t be explained by just the bracelet since the wardancers at 1460 don’t have bracelet for the crit.

give first intention a try is leagues better atm.
i was esoteric before nerf and happy after switching, more fun to play as well.

I had the same problem with my Wardancer then I saw that the Koreans use a completely different build, namely the 1 spender build with switftness and crit since then I do a lot more damage and am often a vip… instead of the tornado (forgot the name) use sweeping kick

With proper wealth rune, moon kick + sky shattering is enough to get back to 4 orbs, its better to do that and tornado right after to get it in ur ww window, if you need to flash fang, animation cancel with spacebar but it is going to be really tight getting in ww window.

Mass increase , cd deals 4% more dmg after the crit nerf. They tested it in kr. So is it game breaking to change. Not really. But since dont have a braclet we deal even less dmg with kbw. We also dont have the full LOS card set, you running with crit card set which still increases value on kbw. But it drops off. FI players and one spender run crit necklace and they have built in crit tripods that together give close to 100% crit, so this is huge for fi

OP, i recommend you to stop following guides. And remember that guides are guides, not dogmas. I have a WD but i play FI because it’s “easier”, but i tried ESO too and without even trying i did almost the same damage as being FI. With some tweaks on the build i’m pretty sure it can get more. We are talking here about 2m+ with both playstyles. What you really need to understand in this game is that you must create your own build, wich is something that 90% of the players don’t understand. For example, you would be shocked to know that i’m not using Grudge. Why ? Because, for me, there are better engravings. Grudge gives 20% extra damage in exchange for taking 20% more damage. Welp, i’m really good at positioning and learning patterns so i better stick with Master of Ambush, wich gives 25% extra damage in the back attacks (Litterally every offensive attack for FI WD with the exception of the Combustion). And the dominion relic set is… i’m not gonna say garbage, but is so wonky, clunky and hard to pull out that i prefer the “i can’t remember the name because in the spanish version has like 3 or 4 different names” back attack + critical relic set. Eventually you would be able to change the relic sets freely, so experiment. Try new things. Watch guides and get the knowledge, but don’t follow blindly. The more knowledge you adquire, the easier will be for you to create your own build, with your own tripods, your own relic set, etc etc… and it will fit your playstyle. Guides are only good to gather knowledge, opinions, and maybe some tips. But remember: Is YOU who is playing, not them.
People is obsessed with some builds (Grudge, i’m looking at you), and won’t accept anyone in their parties that doesn’t have that engraving. Only to see how they get melt against basic attacks because they are UNABLE to dodge or just learn the patterns. They rather do 40 million damage in one hit and die in the first 30 seconds than do only 30 million in that hit and survive the whole fight. Smart is the way to go.