How can I report xenophobia?

How can I report this kind of behaviour in-game? 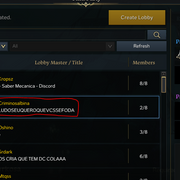 Hope you having a great day!

I’m sorry to hear you are experiencing this behavior with other players, this kind of behaviors go against our Code of Conduct AGS.

Report a Player or Guild In-Game

Note: To report a guild, report a player in the guild and state you’re reporting the guild.

To report a player or guild:

Report a Player or Guild Outside the Game

To report a player or guild outside the game, file a web ticket.

Make sure to include the following:

Thanks for helping us have a clean community, hope this information helps!

Am I missing something? how is that xenophobia? inappropriate sure due to the F bomb but xenophobic?? how?

Translated to english the highlighted memo says: “idiots i want you to go f… yourselfs”

This OP is part of the snowflake pc problem. Reads something random and immediately gets butthurt.

This is not translated to “idiots”.
This is a reference agains all Spanish speakers.

When you are spreading words against people because of their nationality is xenophobia.

No, it’s only homophobia, xenophobia, racism etc when the people who are the intended target of that hate get butthurt. Instead of giving these people the time of day, just move on. Instead you succumb to their hate like a weak willed snowflake. Because at the end of the day, in this context, they are just words.

Would seem English isn’t your first language. Nice job side stepping the actual comment by commenting with nonsense.

Do we know the meaning of the word Xenophobia? That may be insulting, inappropriate, but it is not Xenophobic.

I would call Xenophobic, something as simple as “Speak English” or “This is a NA Server” since most people assume North America is only English speaking, never mind that Canada speaks French and Mexico (Which are part of North America) speaks Spanish, or the fact that The USA does NOT have an official language. The words highlighted as Xenophobic are just words in Portuguese…nonsense, really.

: fear and hatred of strangers or foreigners, or of anything that is strange or foreign.