Is selling/advertising for pilote and/or RMT carries allowed in LA ? (spoiler : no)

So, please can you explain to me why these people are advertising freely for carries that are obviously pilot/RMT ? Do I have to show name and proove that they are selling for real money and pilots ? These guy are dumb enough to advertise with their main 210+ roster level account, weapon +25. Yet they are freely advertising for months and months (since ever Valtan Hell-mode is out) and it’s always same tags and accounts that are advertising … They don’t even bother taking fake account to advertise …

They promote RMT gold (often even sell for real money directly) AND account sharing which all of this is against the TOS. Can’t we have human beings actually monitoring these accounts and take action ? Or maybe that’s “tolerated” infraction I guess ? Especially, these people uses 99% of the time very obvious cheats (DPS-parser basically), who know what other cheats they’re using right ? 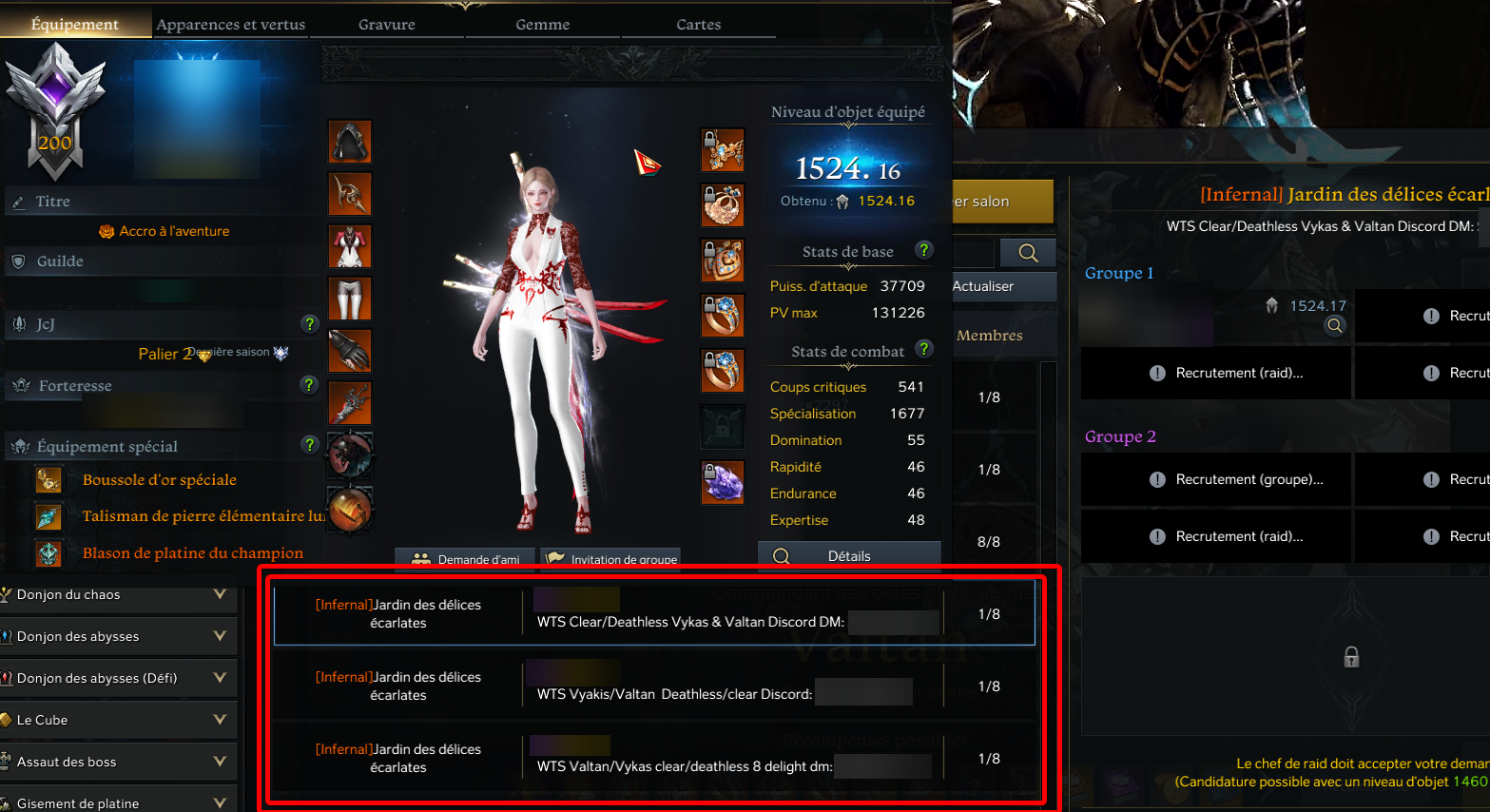 Ya think if its unlikely that there is an actual support that look in detail even into bans, there would be any manpower when it comes to something insignificant like this ? Funny.

They dont have piloting in the title, so whats the problem? Ya would have hard time accusing them anyway.

If people wanna make cash from that, whatever i guess. 7 good players should be enough to sell the bus i imagine.

I would rather have human beings look properly into bans than into this.

And tbh, who buys a title like this - whats that good for ?

In fact, i would say having this title is … the worst. Whenever someone messes up or dies while having one of these titles, they take the most shit of all

In fact, the title is good for one thing. For bussing. But apart that, you dont want to have it on. Cause everyone expects you to perform great, meaning your achievements are devaluated, and your mistakes will hurt way more than regular player lol

If people wanna make cash from that, whatever i guess.

oh well if even the players don’t care about this I guess let’s call it a “normal thing”. After all you can buy gear with $ why not buying piloting at this point ? Oh and the cheats as well, because yes DPS parser is a cheat and they are all using it.

I mean haven’t you seen all these “obviously unexperienced” players running around with Deathless title ? Do you really think that all beast roar’s you met are legit one ? What do you feel when you get a bronze-tier player in your Diamond matches, playing League or Valorant, because the guy bought an account ?

So we’re just accepting that and state that Amazon/SG don’t have time to waste with little thingy like this ?

yeah ok sorry then, can delete this post now.

" they are all using it" - that doesnt help your cause at all. You shouldnt treat your assumptions as facts, it only devaluates anything you say.

So mad for something that is literally none of your business. LOL.

What do you feel when you get a bronze-tier player in your Diamond matches, playing League or Valorant, because the guy bought an account ?

LOL. You are just mad because you are not good enough, and can’t find 7 others to pass a deathless run. Period.

" they are all using it" - that doesnt help your cause at all. You shouldnt treat your assumptions as facts, it only devaluates anything you say.

bro comon’, I’ve done some helltan while bored. I’ve been asked to kick people because of their DPS. Not like I care if people are dumb enough to use cheats, I won’t even bother reporting this, they’ll get punish naturally at some point anyway for their stupidity.

What bother me is that these people are basically freely advertising with their main account, just like this was normal, just litterally telling everyone “hey look I do borderline-TOS thingy and I don’t even care because nothing will happens to me” yeah that’s it.

I’m out don’t have time to waste with people that just want to argue for the sake of arguing. If you don’t care about it great for you, I don’t care that much neither. I do care about the integrety of games I play tho, and seeing legit account with 210+ roster level advertising freely for TOS-kind-of-stuff sounds like a slap in the face for a legit player.

especially if it’s for real money).

? How do you know it’s for real money? Proof?

Selling coaching is against the rule??? WOW!!! The stupidity you are showing right now is funny. What’s funnier is you think you are true. What’s even funnier is that you think by somehow posting this here, with no evidence whatsoever before you “accuse” others, is doing a good thing to this game. LOL.

if you are so sure they are “piloting”

then why don’t you record everything…go into their discord and get PROOF they are doing what you say they are and report it?

He doesn’t have time for us! Let the man live in his own world and be mad.

for carries that are obviously pilot/RMT

That’s called Appeal to probability – a statement that takes something for granted because it would probably be the case (or might be the case).

I wish we had a penalty for this one in the forum’s rules because some people so overuse it (if you are so into TOS you’d follow community rules, right?).

What do you feel when you get a bronze-tier player in your Diamond matches, playing League or Valorant, because the guy bought an account ?

I don’t play League or Valorant because MOBAs are toxic garbage.

If you are sure that these people are piloting report them.

The thing you forget to take in account is that I recommend the compagny running the game to “do further more investigation”, not to blindly ban these people for advertising.

And yes, when something is “probably illegitimate” it’s natural to do further investigation. Plus they don’t mention price, obviously, but that should be way more than enough “clue” for you to at least start an investigation.

You’re trying to defend something that is not defendable. These people deserve to get watched over, and if they are indeed cheating, RMTing and selling pilots, then they should be banned.

Anyway, your post is just about arguing for arguing here, if you think these people sell legitimate Deathless Hellkiss carries and coaching, great for you. But you must be either trolling or really naive to think that’s what these people advertise for.

Do I have to show name and proove that they are selling for real money and pilots ?

As I can see, their selling busses for an unknown amount of gold. No Pilot, no rmt. At least not in the SS u posted.
I suggest ur not able to proof something in that direction, otherwise you posted it.

Video? And again, any proof?

Its not that ppl dont wanna believe u, but right now, your the Amber Heard of Lost Ark, with nothing to proofe.

I suggest ur not able to proof something in that direction, otherwise you posted it.

That’s not my job and that has nothing to do on the public forum anyway (hence why I have even hidden their names).

Whatever type of entitlement you guys are deeply rooted in doesn’t change the fact that these people are advertising for extremely suspicious activity (account sharing basically), should you believe or not doesn’t really matter.

I guess if everyone agree with theim doing such activity it’s fine then, it’s your game as well after all. And also

I’m out don’t have time to waste with people that just want to argue for the sake of arguing.

this. It start getting boring. In both case I’m bored of this thread already, thanks to you so yeah ! Great talk tybb.

LMFAO. You suggest the company investigate those who created a lobby for advertising? Who do you think you are? LOL. It took me over a month to get the deathless title. I had to find different teams in between. You see, deathless run not only requires YOU to make ZERO mistake during the entire run, but also your whole team. So it’s hard.

If I knew there are people out there with a good team, I would pay for that to join the team. Why wouldn’t I? They have 7 good players, they deserve to be paid with good skills. If you say the service is against any rule, how about bussing? You telling me paid coaching is against rules, I recommend you quit the game asap, as this community REALLY does not need you in any way possible.

I’m really glad if you are “bored” of this thread. What you did is ruining the community, and pay no respect for players with skills whatsoever.

If I saw you opened your bag in a public area, and I suspect you are going to pick out a gun FOR NO REASON, JUST MY PERSONAL THOUGHTS. Should I call the police immediately and get you arrested and do a complete scan of your personal belongings? XD?

That’s not my job

But apparently making accusations with no proof is…

Makes Deathless titles worthless if you see any player with them you should not treat them any differently.

Can’t we have human beings actually monitoring these accounts and take action ?