Now more than ever, your review matters on Steam

I believe it’s time to let AGS and Smilegate hear your opinions. They said they will gather feedback from these forums, that your opinions are heard, collected, considered and shared but how much do you believe that?

Smilegate reported that the NA/EU region launch of Lost Ark was a major success with more than 500+ thousand concurrent player, solidifying their position with the western audience. Clearly, they knew by then what those numbers consists of.

We called for faster class releases, stronghold honing buffs, skins and quality of life improvements but it all fell on deaf ears. What did they give us instead? YOZ’s -effing- JAR, 1 class every 2 months, noble banquet 2.0 skin and business freaking intelligence

Therefore, I strongly believe now is the right time to leave our feedbacks in the actual PROPER channel that will not only educate new players what they are potentially getting themselves into but also where we know AGS and SG will look at, and that is the Steam reviews.

I rest my case here. It’s up to you guys to take action.

P.S.: Those who got screwed by IP ban/block and have spent money for the past 4 months since launch, you should leave a review as well as you were paying customers.

r/lostarkgame - Employee speaks out about his time at AGS 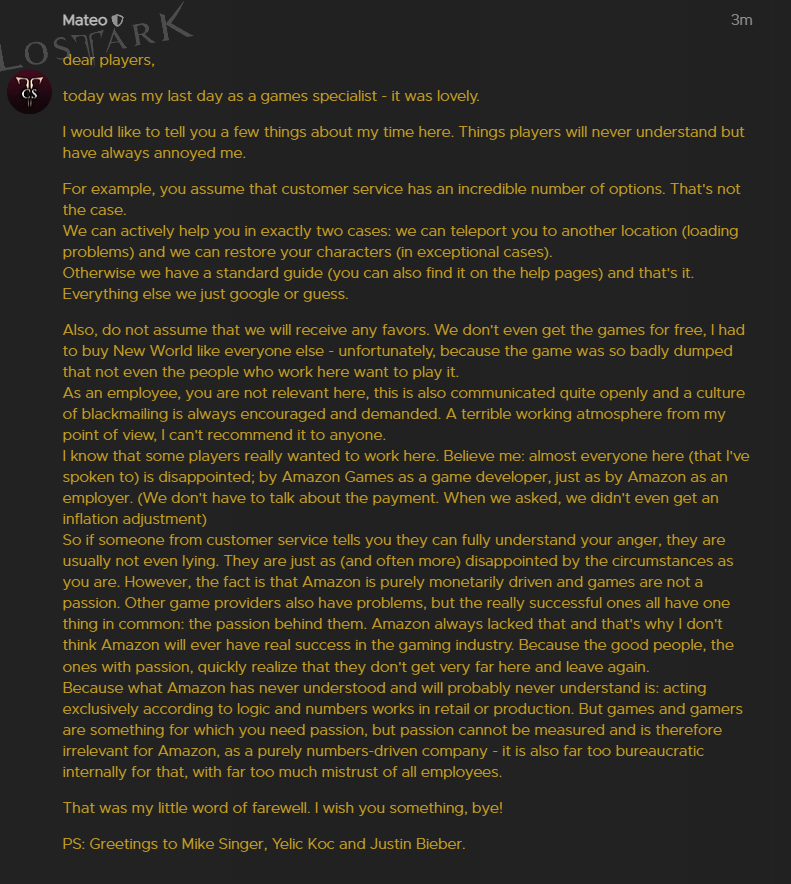 130 Likes
Koreans can no longer play in NA (Bot problem fixed!)
While there is maintenance take a minute to leave a review on steam
Why people hate this game on steam?
Selec June 9, 2022, 6:29am #2

I mean, they kinda put the current players behind the new players in order of preference, so they pretty much set up the target of our complains. The new players.

Thanks for reminding, i did write long overdue positive review. Not giving in to vocal minority for game longevity was one of better decision they’ve made.

Just did. Unfortunately had to leave a negative remark due to drip feeding classes.

i mostly ask since the beginning these damn classes… And just for that, i ask everyone to downvote lost ark on steam, ive done it and i hope you will too.

Refusing to give us honing 1460 with vykas patch is also a joke.

So many entitled people playing this game. If you don’t like it… you know where the door is.

I hope you’ve never returned or wrote a bad review when you received a faulty product or got a wrong order whenever you made a transaction somewhere. If not, you’re a hypocrite.

You don’t even need to talk about buisness models, drip feed or anything like that.

Just describe what you do each week. That’ll turn so many people away instantly.

P.S.: Those who got screwed by IP ban/block and have spent money for the past 4 months since launch, you should leave a review as well as you were paying customers.

Finally, someone that acknowledges a problem and has some sympathy.

I’m trying to imagine this… Not getting a picture.

I encourage everyone to leave a review, it only takes a minute. Recent reviews has changed to “Mixed” from “Mostly Positive”. Keep it up.

I wish they’d given the west the version that failed in Korea. ie everything T1/T2.
It would have done well here if they just expanded on those concepts.

I imagine most had fun leveling. The action cutscenes and camera angles, driving mechs. I was doing stuff I’d never done in an ARPG before. Sailing to random islands just to see what’s there. Intermediate continent exploration/questing between honing. All the side content was great.

But apparently that’s it. That’s all we’ll ever get of that version of the game.

Facts, this is unacceptable. Instead of dealing with RMT day 1 like they should have (permabans, harsh public statements enforcing zero tolerance policy, making examples out of people); they let it slide with a “case by case” basis. Restricting people from regions that help build this community and inflating concurrent numbers with filthy bots. If it’s deemed worth it to RMT people will do it. It doesnt matter if they Rmted for 20k gold or 20Million, permaban, make the message clear. But nah, we’ll have the director make public fucking statements about zero tolerance for parse meters. Take stances on shit that matters.

While i’m not one to bring out the pitch forks, the OP is not wrong.

There are glaring problems happening within Lost Ark, both to the players and to the game itself. The rampant RMT and Botting are huge concerns, concerns that could theoretically get the servers shut down.

There are no new players and the game itself is in a really bad spot in terms of daily content loops and slow progression. We are not KR. Our servers here did not have years to develop and build a loyal fan base that grew alongside the game, so we have to stop comparing our server to KR.

Leave a review someplace, anyplace that isn’t negitive, but informative, pointing out the real issues the game has in hopes that somewhere, someone who not only cares, but has the ability to enforce some form of change reads it.

Again, just being negitive doesn’t solve the problem, even though we are all fustrated to that point. Address the real issues and help others make informed decisions about both playing Lost Ark and also how to better support Lost Ark in NA.

There is a disconnect somewhere with AGS/SG and the community and Lost Ark will fall further into ruin unless it is resolved.

I imagine most had fun leveling. The action cutscenes and camera angles. I was doing stuff I’d never done in an ARPG before. Sailing to random islands just to see what’s there. Intermediate continent exploration/questing between honing. All the side content was great.

Yes, ironically I had the most fun, had the most sense of adventure and exploration when I was leveling my main through T1 and T2. I was really into the story even though it was cringy. Islands were like stumbling upon new land and everyone was helping each other out with tips in Area chat.

I couldn’t imagine writing a bad review for something I have spent hundreds of hours doing and enjoying.

What I couldn’t imagine doing even more is spending hundreds of hours on something I didn’t enjoy and going onto a forum and complaining about it.