Q1: Why is Scouter so popular?

It’s not lol
At least not in any region where scouter exists.

Yeah, there was another answer showing its popularity in KR.
This one was referring to the West.

Can I buy the cyborg box on any class and open it on Scouter? or do I have to buy it on a Gunner (Male) class and place it in roster storage?

We were hoping to have some fixes in for this week’s maintenance, but unfortunately they weren’t ready in time. Now looking towards next week. As far as the honing books go, we will be extending the duration on these to make up for the time that they didn’t work!!

No Powerpass and no hyper express is just a joke. On KR they already got a 1415 hyper express on vykas where we got 1370 and they also got global hohning buff for 1415 for which we only have the stronghold research so far. We get faster class releases → less inflation in mats → higher costs, less mats through events overall. Considering that, not giving express/powerpass with every class like in kr just dont make any sense at all… yes it will be way more pass/express per year compared to other regions but the ratio of pass/express per class is the important thing… i think they just dont wanna see this or want people to spent way more money than in other regions… so sad, really loosing motivation after 3k hours played seeing this.
I thought, now that they revamped the release schedule from one class every 1, to 2 months, we will get an express/pass for sure because on destroyer they said they cant give out these things every month with every class. I thought putting this to 2 month was the point to be able to give out these kinds of events.
Guess no scouter for me then because without an event i simply cant afford it. Still trying to accumulate enough gold to get all my chars in good setups… then starting a scouter from level 1? No way. Not everyone has spare knwonledge transfers or want to spend fifty bucks for a powerpass to be at level 1302, hohning without global hohning buff after 1370. I guess scouter is swipe or dont play for now. I wonder why so many people rmt.

Dont get me wrong, I love this game. But thats a little too much for me if it continues like that.

@Roxx …maybe this will be seen…
@Shitsu great post tho

A good decision will be either:

I am saying this also, because they have to compete with WoTLK. They have to make the Scouter release so big to draw mass players. Why Free Punika Powerpass and Hyperexpress with Arcanist and not the hyped popular Scouter?

@Freigeist Thank you for your kind words. That makes me happy :3

Its just sad. I was really hyped for scouter before someone told me there will be no pass/express. I didnt even think about that they couldn’t bring this with scouter because its clearly one of the most hyped upcoming classes. So i was a bit shocked. I was sure there will be sth. like a 1415 express at least. Damn it, i am sorry xD… I am just extremely frustrated right now

It can’t even be for money reasons they dont release a free pass and an express… because they will make less money with people buying a powerpass than 10+++ times more people playing the class with a free pass/express, buying pheons and maybe even currency exchange gold to build the class properly, even if only as a twink… at least thats what i think would happen

Many share your feelings. They still have time to reconsider and market it with a Powerpass and an event. It will be a huge mistake not to.

It can’t even be for money reasons

What you said here is totally true, retaining players and having them spend money into endgame is what matters. However, they only think about short term profit.

so… WAKE UP AGS :D… we even will bring u coffee and cookies…

Well from a player standpoint all classes should come with a 1415 powerpass and a hyper express to 1445/1460 so the option to change mains is available in a reasonable fashion.

From a business standpoint that is plain stupid because if you give everybody their highest ILevel for free (basically) you give them a 6 char roster earning tons of gold and they won’t need to swipe as much, leading to less profit.

I would like to meet at the middle with a 1415 powerpass or express event and then from there you can either spend resources or money to push further if you really want to, still making them money while giving the larger part of the players access to the class in „endgame“. Doubt that will happen though.

Any good guides on AT scouter? I have zero desire to be Ironman as I prefer the drones and submachine guns. 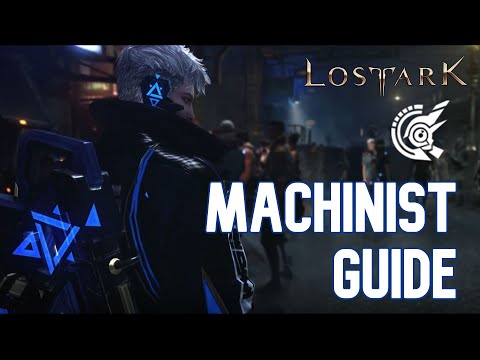 This guide is rad, just wanted to step in and say Ark Pass is not releasing with Machinist – the “after” comment is for after the merges are complete, which means it will pair with a future update. Sorry for any confusion!

Do you have any word on whether or not we’ll be getting more character slots (up to the 24 that KR has) with Machinist’s release? It would really suck to have to delete characters for those of us already using all our slots…

and any information about the pass/express situation mentioned above where i tagged you? Would appreciate if you would read it

Thank you so much for your warm message. It made me really happy that you liked it.

Is the Balance or Tripod change coming with the Machinist?