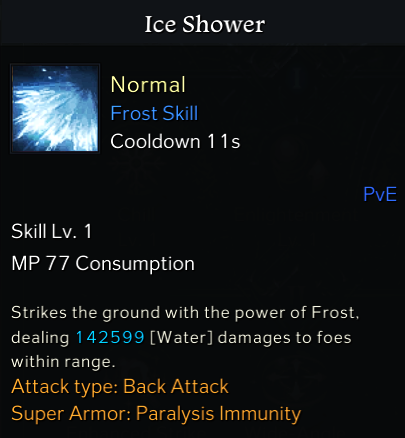 Tried to use it on the new Guardian Deskoluda, but didn’t work on it.

Bump. Mine also does not have counter.

Correct its a localization error @Roxx if we could get that changed soon ? : ) The skill works as a counter just fine just doesn’t list it in the tooltip

What’s right now? Is it working and only a tooltip error or it’s not working ?

Same! I hope they fix this sooner rather than later.

It doesn’t have a tooltip and it doesn’t work as a counter either. The change didn’t make it into the build.

@Roxx could you please let the devs know that the New Counter called Ice Shower for Sorceress isn’t showing AND working as intended? Please?

I just made a post about this as well, Squall isnt a back attack either. Not sure if igniter’s damage values got changed at all.

It doesn’t have a tooltip, but it does work as a counter.
Stop spreading misinformation.

Unless, of course, you are using one of the lvl 3 tripods? You know, the ones that literally say “does not work as a counter”?

i have tested it the entire day and didnt work at all. Also it still shows the “Frontal Attack”, but not always?!. Im only using 2 lvls of tripots, Faster casting speed + push immunity.
EUC server btw. But shouldnt make a difference (i hope

I mean, I just used it today on Deskaluda, it worked just fine. Also EUC. Idk why they said it changed to back attack though. You still need to hit the front of the boss.

Well, ofc you need to hit the front. maybe they fixed it over night?! idk, will try later again,

I made a post yesterday after testing, Squall still says Front Attack, but it functions as a Back Attack. Ice Shower doesn’t say counter, but it counters. It even counters with the T3 tripods which say it shouldn’t. Lots of localization issues I think. I tested everything on T1 Ur’nil which has a super easy counter window. Deskaluda’s may just be too small for the wind up of ice shower because it’s not instant.

oh look at you triggered by a random comment !?
Have fun!

I mean, I can also lie on the internet and then say that everyone who calls me out is just “triggered” lol

Nobody cares about you being angry and unloading on strangers on the internet.
Thanks. Find some other thread to spew your stuff. It’s not our fault that the build was buggy, that the tooltip wasn’t correctly implemented and that the counter didn’t seem to work for me. Get a grip internet stranger.