Thank you for the nerfs. The game was just for 24/7 hardcore gamers 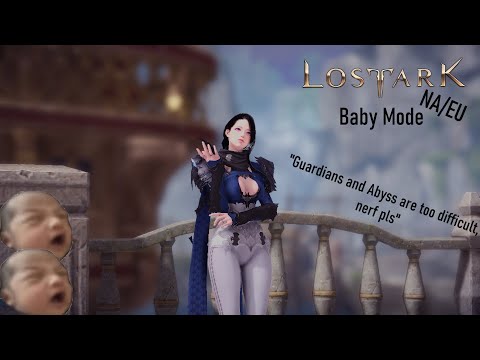 If you do not like the changes and the way that this is going on the FFXIV way and AGS making the game to accessible for everyone than:
…this is probably not for you then.

See, I can say that to you too.

wait what? i need to move my mouse and not be afk and actually use skills? too hard pls nerf

The content is too hard and should be changed?.. Did you guys ever just think maybe this game just isn’t for you? lol. This game is meant to be hard and challenging. Its not meant to be steam rolled in a day. Do you play dark souls or something and ask them to nerf all the bosses? No, of course not. Why? because you know that dark souls is just a hard game.

Can you do the same as me? I can clear a 4 man guardian raid alone (I posted screenshots, 2 of them ,so you can’t say it’s a fluke). If not… maybe this game is not for you, so please quit it. So, can you do?

Yup…well, he pretty much shot himself in the foot with me:

I already responded and I even uploaded pictures where I actually soload a 4 people group guardian. These Guardians were overtuned for a daily content. As you see, I have no problem soloing, killing them in 4 man group or whatever. I can certainly say that: This guy is someone who tries to prove something over these guardian raids (Just imagine making this video about me being a problem, and yet now I posted the screenshots and turns out he is actually not even as competent as me it seems. Lol…

I posted some screenshots where I cleared Tytalos 4 man alone and I posted where I’m at guardians currently. Actually, it seems he is actually doing worse than me. True Chad… with minority complex.

He assumed that I posted this because I can’t clear content , yet I posted because I do not want this content to be a chore. Yes, I would perefer the FFXIV way and have the game accessible by everyone.

Unlike his, my ego can handle if others can clear the some content in a game that I can. Why? Because games should be about fun and no… Leaving out casuals (or anybody) from a content is never good. I do not want a game with a small and toxic hardcore community, I want a big game with a large, healthy community without this e-peen meassuring.

This guy who made this video is the perfect example when you should look for professional help over a video game addiction because you are trying to be “above everyone by proving yourself in a game”.

I can do the same as him yet I’m in favor of the nerfs.

The point when he sais that our server is a baby server is the most pathetic thing I heard, he basicly tries to bully others. Now imagine if someone bullies him cause he can not lift more than 20kg not even mention more or because he can not achieve a CEO position in life or etc…

This guy has a messed up mind.

YOU will lose your game too

No I wont, ill just move to KR or RU if hyper casuals destroy the game. you know, the regions where people didnt have “Issues” with the “Oh so hard” content. I say issues in quotes because literally every “Issue” is solved by learning the fight, having the proper engravings and bringing proper battel items along with some gool ol fashioned hard work

No it was not. All the “issues” literally stem from people who can’t manage what to do when they hit a roadblock aka wipe mechanics. I would agree that the game does not communicate what the right solution is and that communication is the key to solving almost 90% of all the abyss dungeons while self awareness und experience is key to solving 90% of all the guardian raids.

The problem is that people didn’t give themselves the time to learn and become better at the game. They view a 10% success rate as a systematic failure at the game, I view it as an oppurtunity for 90% of the players to become better at a game they (hopefully) enjoy. But you have to get in your head first that overcoming boss abilities is part of the game and they are not there to annoy, punish or make you miserable.

If playing Abyssals and Guardian Raids makes you feel miserable, I’d ask why you are doing them in the first place. You don’t need them to progress. You can play literally any kind of content by just doing Chaos Dungeons and getting to the necessary ilvl. You only need Guardians and/or Abyssals if you want to play its harder iterations later on and maybe later Legion raids. But if you already feel that Achates, Tytalos and Flame Fox Yoho are too hard, then let me tell you that you won’t enjoy everything that is coming next as well.

HOWEVER: If the nerf helps people find the game more accessible, thats a plus. My fear is that the nerfs will probably lead to a wrong perception of what people will face later during the content pipeline.

Meanwhile in reality…it IS changing, don’t like it? leave.

AGS is a business and they will do whatever is best for the business, which means if they have to lower difficulty of certain things to get more people playing and not bailing when they thinks it’s no longer fun, then that’s what they will pick and all the screeching about it here won’t change it.

HOWEVER: If the nerf helps people find the game more accessible, thats a plus. My fear is that the nerfs will probably lead to a wrong perception of what people will face later during the content pipeline.

If anything, more people will play and try these bosses/content and there will be more chance to them to actually learn.

Meanwhile in reality…it IS changing, don’t like it? leave.

meanwhile… in reality nothing is set in stone yet and player outcries and dissatisfaction have changed several games. Until the patches drop I will continue to say that westerners simply need to get better at the game and use their brain for once.

Good luck in T3 though, thats where stuff ACTUALLY gets hard lul

Ok keep at it then oh mighty crusader! lmao we will see but so far they have said it’s coming with the update so…lol
I could give a rats ass about T3, as long as i’m having fun

Ok keep at it then oh mighty crusader! lmao we will see but so far they have said it’s coming with the update so…lol

AGS has said a LOT of things that turned out to never happen sooo. but whatevs kiddo. have fun

When their motivation is more $$ from a much more vast majority of players than the uber hardcore serious mmo gamers…yeah right. You underestimate the power of money.

the vast majority of money a F2P game makes is from its core dedicated audience, the “Nolifers”. Lost ark is a game that naturally caters to the type of gamer that likes a challenge and likes the low enhancement rates by design. those are the players who will in the end keep the servers up. not the hyper casuals.

When motivation is money thats when crap gets REAL bad. look at BDO for example, one of the most P2W games on the market (If you want to play competatively) the vast vast majority of their funds come from 650+ GS players (They showed it in the last calph ball)

I dont underestimate the power of money, I know exactly what happens. many of you do underestimate how terrible AGS as a studio is though.

You alright my guy?

Whos gonna tall em that going in solo reduces the HP and makes the boss easier if there arent any wipe mechs?

Why is there so much hate against these people who like the challenge?

You know there should be casual and hardcore content, but as always, the casuals want to nerf every aspect of the game.
Dont get me wrong, I like the T1 & T2 nerf cuz its no endgame content.

Maybe just get better if you want to be part of the upcomming upper raid bosses (T3 Raids) and dont blame your freetime management for your fails. You can dodge a mechanic even if you are not playing 24/7.

if you start nerfing the game in T1/T2, the same thing will happen when casual players reach T3. this whole thing here is not about hardcore players crying, its players who like the game as it is dont want it to be ruined because some casuals cry or some hardcores cant grind there 100 alts in time.

im tired of this. i really enjoyed the game so far, but once i went to this forum i got annoyed. just let the game be the game. if you dont want to spend that much time, leave. but dont beg the publisher to downgrade the experience so it fits your daily routine