You are wrong. Those who cheer on this are someone being happy about others being not happy. They don’t care about skin prices or shit, they just don’t want others to have things they can’t have.

Who are you talking about?

Just like we see with mfs crying about the honing we would resultingly see people crying about spending 300+ on one piece of the skin vs some f2p 1 tapping a legendary skin set.

Lootboxes when it comes to things that will ultimately be labeled p2w are not good things for the game. I was never really vehemently against the yoz’s jar system but people should def face the fact that in the eyes of RNG no man is equal and that releasing the system as it was would result in the same shitstorm we’re in right now.

you are hardcore white knighting in this thread lol

This seems so simple to me. Put the legendary skins in the store for royal crystals and blue crystals at a 10% or 20% mark up over epic skins. Done. Problem solved. Everybody wins and no bitching from anybody.

To me this reads as: we are waiting to see what happens with all legislation talk surrounding loot boxes at the moment and if/when it dies down they will put the Jar system in.

Is it true that in the image the 2 ladies in the front are advertising the Summoner and Reaper skins? Wasn’t this a mistake?
A pretty cruel mistake if true as we aren’t getting those ladies for many months. So maybe they will release Yoz jar when these ladies appear…

Naw, they should be several hundred dollars. People didn’t want the RNG, so they can pay the average cost.

This video shows you all the Legendary’s…
Only shows Arcana, Bard and Summoner. (mid video)
The summoner skin is indeed shown in the image above… dead centre… is NOT the sorcerer skin. 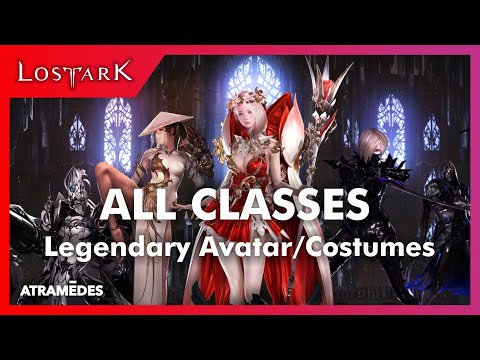 The system should have been altered for us, but not removed. That removes the positives as well, whereas they could have just made it that you get the legendaries in like 10 boxes max and be done with it.

There is no legislation though. I wish people would stop running with this narrative.

I’ll start by saying that I dont really care about the legendary skins even if they give 1 or 2% more stats.

But, you make it seem like’s its all pink colour when its not in reality. The reality is that only those willing to spend thousands of dollars would get a legendary piece, and since there are 2 colours of every legendary piece, the chances of completing a legendary set are low as f, that would make them cost like 60-80k gold ( I think even more) on the market, so there is no way f2p players would spend that amount on every piece of the legendary set, that would make ppl start with the “p2w” bullshit again. And yes, I only talked about legendary skins cuz lets be honest, nobody cares about the epic ones even if some of them look better than legendary ones, Yaz’s jar was controversial just because of the way it was designed not only by NA/EU community but also from experienced players from KR/RU, so I dont even think its worth arguing that the system was good for f2p when its clearly not.

Now, you can argue that since it was designed like that, even if its a predatory design, amazon shouldve just released and think about a way to fix it later, and I still think that would’ve been a problem once ppl actually realised how much they would’ve to spend in order to get a full legendary skin xDD.

A chest piece for one of the most played classes is like 15k gold on KR and 20 on Russia. Very farmable. Don’t think only whales would have been able to get them.

Maybe if you want a full set you would have to pay a lot considering some pieces are more expensive than others (artist hat is 40k) but you would be able to own legendary skin (pieces) and that’s good enough. The main point is cosmetics, not 1% stat boosts.

The reason I say it was good for f2p is because there were a LOT more skins available at all times thanks to the fact that opening boxes provided them constantly. That’s a good thing.

You need to dismantle 2 skins to get 1 skin which would make prices of all skins go up, not down. nice try tho

You are aware of the fact that the game released in those countries like YEARS ago right? ofc in a few years prices would drop

Eh, not really. The more there is of something the less they will cost. You can’t say either way because they haven’t been added yet. You could in theory blame potential price activity on botting and rmt, but that’s not an issue inherent to the jar and fabric system.

Was actually curious how AGS was going to handle Yoz’s Jar. Its a straight forward gambling mechanic and since kids do play this game that would be a bad look for them, potentially opening up issues for them in the future. Legislation is definitely coming to games with lootboxes its only a matter of time.

well and its not fun

There is no legislation coming at all tho. There was one article about a few countries having some parties discussing it, but it wasn’t elaborated any further. The EU can’t get themselves to agree on actual real world issues, there is no way they’ll do anything uniformly about pixels in video games.