West are too bad to do certain Vykas pattern, must be a bug even though it’s exactly the same in RU/JP/KR

While I appreciate posts by others saying it is RNG, I also would like to point out that it is at least odd that she spams “mechs” at the start that people usually only see after stagger mech (102) and at longer intervals + less frequent, while on “normal” runs those “mechs” never happen before 102, at least to my limited experience (~12h in G3).

But literally every other region is this way. How can people still call it a bug when others who play on KR version already told them it’s not a bug? Yes it’s odd but that’s literally what RNG is. If you 1tap 1% on weapon with free mats I bet it’d feel odd too since it’s 1% but it does happen. Same applies here.

In the first week of Vykas out of all the pulls in Gate 3 I NEVER saw Medusa or Whales pre tentacles. Starting from Week 2 Medusa and Chains have appeared at random times but I still see no whales early. If anything the first week was bugged or made easier to account for 1 less day before next reset and starting Week 2 the fight was put to work as intended.

Or kakul right at the moment something is “off script”

Other KR streamers said its not a bug tho, so whose right? lol

Also all the Vykas clear videoes on youtube in KR I’ve seen, medusa and chains doesn’t start before like 70x bars

That’s 1 pull where they happened to kill the boss. Have you seen all other pulls they’ve had where they wiped? 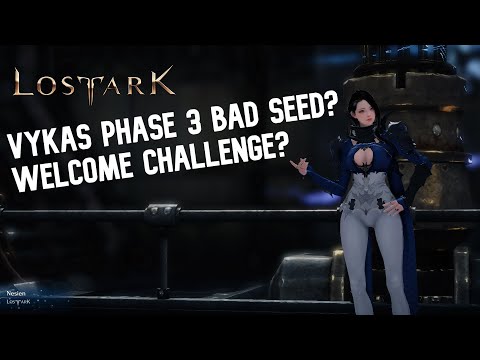 Also he makes a valid point later. The slower you are on damage the more chances you have to get all these mechanics. I pugged Hard Vykas last week cause I couldn’t do it with static and we got Medusa at some point every attempt. This week did it with static and didn’t have a single Medusa at all because we pushed every bar mechanic almost one after another.

If you watch the clip i linked, you will see that the fish didnt despawn and the last one actually ends up on top of the north orb. It would have killed everyone had wr all been there. If that isnt a bug, then it is very poorly designed. The only way i can think of that maybe would have worked is if we went to a side orb and that would require both pre planning and probably everyone on discord. I guess thats fine to design around but then you shouldnt even have the option to matchmake for it if you did build it around assuming voice chat.

The only reason you even GOT fish there is because your DPS must be extremely low. I have NEVER gotten fish pre x55 bars and I’ve been full clearing Hard Vykas since Week 1 of the release. I didn’t even know it was possible to get it THAT early since it usually happens if there’s some time that has passed between mechanics.

coming from WOW, mechanics overlapping is something you would see in raids very early. usually the solution is to hold dps and resolve 1 mechanic before pushing to the next one or just try to wing it, which is very hard to do in pugs but statics dont have that problem because you would be in discord communicating it. i think you should have just stopped dps when you saw whales and you were nearing typing test since the typing test is scripted.
in your case i dont think you can really call it a bug.

Never was bugged to begin with.

ive even seen people talking about how its a “seed” problem

it absolutely is a seed. because when i was learning vykas we did like 4 hours of her wiping over and over and never got these mechanics until after tentacles

just to be sure,

what is the point of this post ? lack of knowledge, skills, focus ? cant do one or another simple mechanic ?

all mechanics like medusa its so simple, normal mode just all look away, hard - 0-all look away, 1- one player look,2- 2players look, you dont need to complain about mechanics like this, kindergarten level of task. or invisible whales - just run 6 or 12 and wait for 30sec… wow… sounds so complicated…

tell me a single one mechanic in Vykas raid, what demands high level skill, or high level knowledge to do it.

so the problem is not mechanics, its players, blind, skil less, not focus on details, or others excuses.

the point of the post is, 1 way is exceedingly easy and if you get the other “seed” the whole thing is much harder

the game should not be designed to function with a large RNG skill variance that is determined on entry to a raid, should it?

so either one way is right, or the other

not BOTH… never both

so random mechanics appears only betwean main mechanics, so when you do enought dmg… you can skip almost all RANDOM mechanics, ofc you can get one or two, but still…

and your theories with ,seeds, its just…meh

i had some experiance with random parties in vykas raid… and what i can say… Counters? never happens… typing another problem, even swamp(turtle run) is problem for some players again and again… you can see clearly how many random mechanic you can see from start of the fight to tentacles when all alive and push as mutch dmg as they can… and from 30x to 0x bar when just few alive…

you can change your bad,seed, theory to bad party

another question: it is posible to do Vykas with 3x3, or KUKU with 4x3 ? ofc, if you skill enought to do all random mechanics which appears when party lack of dmg

Iirc, if you get medusa over a certain hp bar, then it’s always 0 and only 1 wave

no one argued that you can’t beat the bad seed…