When is the Lost Ark API coming? An extensive look into the API and it's current implementation status

One of the rare good ideas on the forum. I wish that it would be possible to share roster without making screens with gear from every 6 characters beside AH insights, calcs and other helpful tools.

The optimal situation would be one where they improve the market place interface and have all of the features of icepeng built into the game, and also have the API publicly available. The API would allow for us to access all of this outside of the game. Even if we could already do it in the game, people who don’t have much time to spend on the game, or people who want to plan out their gear outside of the game could do so.

The API is also more than just a marketplace off game, it can also serve functions like what loawa does, an armory, rankings, etc. I completely agree that everyone could use a better marketplace interface. The API would help with that issue and bring along much more than just that, like I said earlier.

As for your earlier message, I sent messages to a few people who I thought would be most likely to view my post and hopefully provide feedback, as they had shown interest in the topic of the API in general. Even if someone is against making the API public, I would want to know why, and maybe find a point we agree on.

Korea already has it, we can preview peoples gear etc etc.
In fact Loawa would be able to include our servers in their searches and rankings if our API was public.

Just logged in to upvote this thread. Me and 30+ other guildmates would really appreciate this QoL patch, as it costs several ours to check auction house for the optimal gear set up. Imho one of the best QoL changes KR received and definitely wanted (and needed) in our version too.

We need this badly. Spending hours on the AH trying to find the cheapest combination of accessories out of hundreds of possible combinations is not fun.

I’ve posted replies in several of these threads, including details why it’s important and what kind of things could be done by developers like myself for the benefit of the community without needing AGS/Smilegate to implement them. I think it’s ridiculous to base the decision of whether to make an API available on public sentiment/feedback, because the vast majority of players don’t know what an API does or why it matters.

I know I’m not the only developer asking for an API and it’s our voices that should be listened to.

Glad to head the thoughts of an actual developer on this topic. I haven’t had any development experience so I’m not fully aware of every extent to which the API can be used.

It really depends on how the API is implemented, an API is kind of like a digital assistant in a way. The person who’s developing it determines what information/functionality it provides and what it will respond to, so they can include as much or as little information as they want.

So basically, it depends what Smilegate want to give us. However, in games like this it usually includes things like player data, auction house, timers for events/islands, etc. So there’s a lot that can be done, but I’m just hoping we don’t have to wait too much longer because it shouldn’t be hard to make it available.

This isn’t universally true, but most code doesn’t need translating or anything so it’s mostly just documentation (which frankly isn’t that important as most developers are used to figuring things out for themselves).

Thanks for the info, I’m looking forward to checking out whatever tools people make if/when the API becomes publicly available.

Also, the roadmap was announced earlier today. I didn’t see anything mentioning the API as part of Septembers first update, which is focused around QOL stuff, so I’m hoping they just chose not to mention it until it actually releases. @Roxx Do you have any update on if the API will be included in the first September update? The roadmap was really nice though, thanks

Tbh this would be great. At least the CM tries
Hope Roxx is succeeds this time and we get it.

I am so keen for this, hunting for combinations kf accessories to find whats affordable is just a huge time drain. Please give us the AH API!

All we can do for now is make it clear that we still would love to have the API, and hope that it releases soon.

Usually community’s provide better results than the original source there is load of examples also ASG is struggling with simple advertisements and a proper website , doubt they will make something competitive let others do a better job

Don’t want this to die, not until we get confirmation that it’s coming soon.

To add onto my initial post, the API would allow for a live online marketplace that we can access even outside the game. It would be much easier to analyze the market and the trends and figure out when to buy/sell if you want to play the market. Currently I’m using 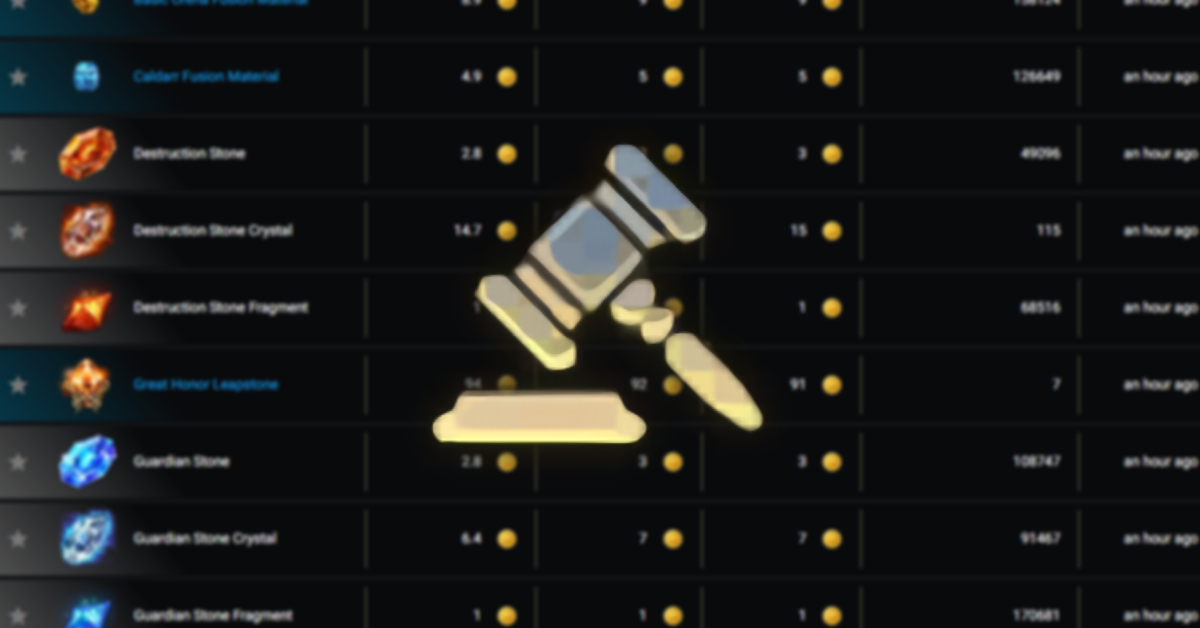 Community sourced Lost Ark International market mirror online. This project is open sourced driven by the community for the community.

but it is sustained fully by users taking screenshots of the marketplace and uploading the data. Because of this, the prices are only being updated once every few hours or even days. If there was an online marketplace that updated even once a minute, which could be made possible by the API, it would be extremely beneficial.

Bump, I really need this.