Why the black Shadowhunter?

what do you mean? People cared since day 1…

Hi! I want to know if this is normal or devs are going to fix this. [image] If you see the demon form of the Shadowhunter have completely different color from the KR and RU versions which looks like this: [image] It looks cool i cannot deny that, but is not the real version of the demon form. I saw a post of this in the class section but I think any moderator check that section of the forum. So If any mod can escalate this to the devs that would be awesome.

For people who cares prev link: Feedback and transparency regarding the controversial changes to the game I know that previous post has been answered by the CM team where some implementations are deliberate, but I hoping to send a message to the devs that the changes in our version for the looks are ugly as hell. The Demon form of shadowhunter Top is our NA/EU version [image] Bottom is original version CMs Reply: Improvement changes: The prob…

Demon mod supposed to look like this and i’ve seen it many times on other servers and played with it in alpha and beta as well [bbbbb] but in game it looks like this [aaaaaaa] After all this time it feels so weird and can’t get used to it. Is this a bug? If not will we be able to customize it?

AGS/Smilegate Please tell me why you did this to Western Lost Ark shadowhunter? General Discussion

Could we please finally get an official statement on why our version of Shadowhunter Demon form got changed? General Discussion

Our demon form is so pitch black to the point of making it look like a bug, meanwhile the KR/RU has white skin and white hair. If it was intentional y’all did a pretty bad job with it, you could’ve at least made color changes to the armor to break up the monotony of the colors, when you zoom all the way out it just looks like a pitch black silhouette. Not to mention the lore inconsistencies. All other Delain retain their skin color and get the white hair, most notably Armen, if you changed the…

Man i really dislike how our version of the Demon form as shadowhunter looks like. Instead of implementing a system where the character keeps their skintone when changing form we just become a black shadow running around so noone can see their skintone. Thats such a lazy change. The cool demon look kr and ru has was the reason i wanted to play the class and now it looks so bad in my opinion

Edit: I am purely talking about the black mist aura and the skin turning literally black as t…

So AGS, since all the concerns and their responses about these topics are scattered across and some long forgotten, I’m going to gather together all the points most of us who care about the game here had at one point and hope for some kind of resolution. If I forget something I hope people can bring it up in the comments, and I’ll add it to the main post. I don’t want anyone’s concerns to be swept under the rug, because one person’s issue should be all of our issues, regardless of what you are …

Here’s all the compilation of the old demon form. The reason it calm down after June/July because of the new form and people asked about whether there is any changes gonna be happening. No one knows until it releases…
Why it blow up even harder? because everyone who plays SH and like the class thought it isnt going to be changed. 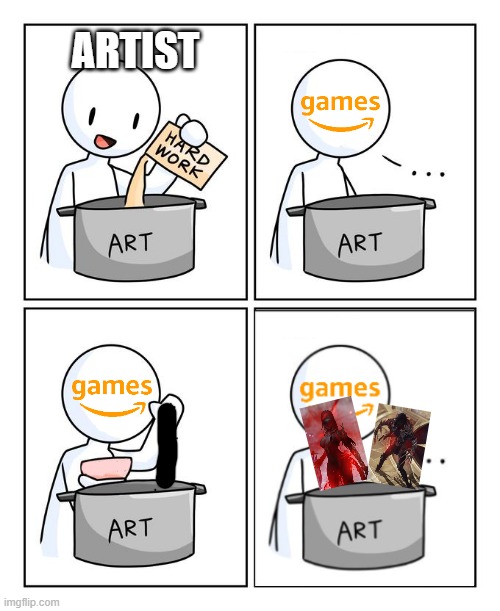 See how that artist put on an Amazon Games logo? You forgot the panel where that person put a check in their pocket.

someone close this thread, they said the reason it will stay like this is because it’s a graphical issue with the amount of skin colour options. be done with it.

Nah we will keep complaining

No, I don’t think so. Shouldn’t you be busy being jealous about pixel panties anyways? Leave the man alone.

someone close this thread, they said the reason it will stay like this is because it’s a graphical issue with the amount of skin colour options. be done with it.

Just because they gave that as the reason, doesn’t actually make it true. Unless you’re comfortable being lied to. Remember all those pheon exploiters that never were? I do.

at this point, why is this thread even open and not closed for a long time @Roxx theres nothing to discuss, AGS dont make a statement and its 99% “bump”-posts, whats the point of that thread?

Point of this thread is to point out that people are not happy. Ye let’s shut it down so no-one can voice their opinion.