I couldn’t find the last two in the Codex or the internet. Does anyone know where to get the last two of these mounts?

The Wild Blue Wolf is from Una rep : Eating with the wolves
Idk for the red one

Correct me if im wrong, i believe red wolf is rng drop from chaos dungeon, and bound to account.

I had the Red Mane drop from a chaos dungeon. Not sure if that is the only way to get it though.

edit: info for the other mount here: Starting off you will be needed to head to Shushire and begin the questline for the continent. Upon finishing several quests, you will stumble upon an NPC named Gray Wolf Bandit Dades. 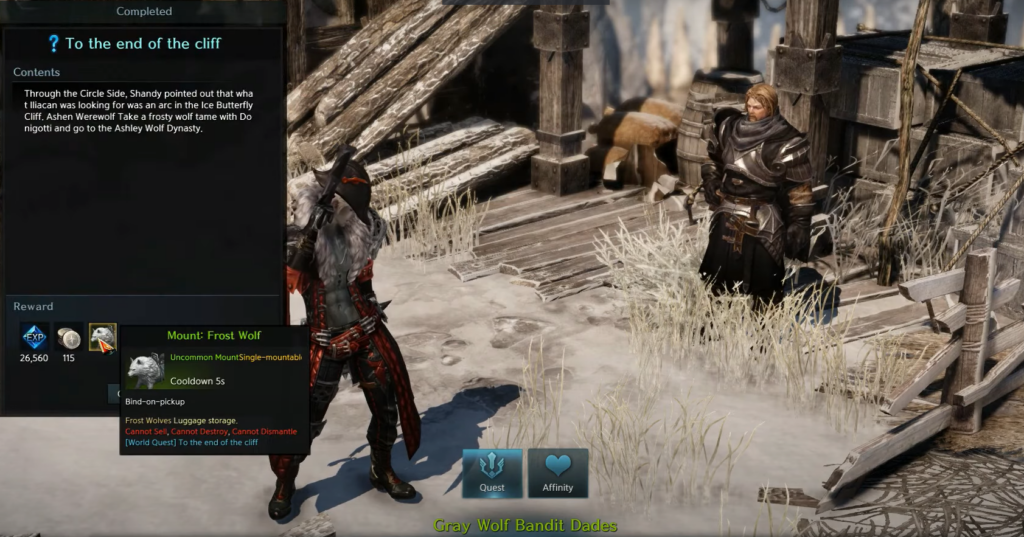 He will have a quest named “To the end of the cliff”. Once you finish the quest he will reward you with the Frost Wolf Mount and you will be able to equip it and ride it. These two wolves I got, the other two are from dailies and NPC Rapport with the Shushire wolf named Poppy. My question is about the last two which are alled “Tamed” Red Wolf and Wild Blue Wolf.

This is Vanity wolf.

Not Wild Blue Wolf, who is Rarity Epic and unfound even in KR

I want this title myself, but the fact that wild blue wolf is listed, but it’s no where to be found sucks. Also still feel like information for this game is scarce or scattered. I wish all the places that made sites for information on this game were combined into one instead of them all trying to make their own thing. Might be easier to find more obscure things. Game needs an actual official wiki.

Thought Forpe might have Tamed Red Wolf, but it doesn’t. It’s actually the exact same mount you can RNG from chaos dungeons. So where the hell do you actually get Wild Blue and Tamed Red?

Exactly, I had hoped ppl in Korea perhaps found them but apparently noone knows.

Is the Mount contained in the Amethyst MPC also included in this achievement? Is the Mount contained in the Amethyst MPC also included in this achievement? It doesnt look like any of these that I’ve collected so far, it seems possible

Hihi, I know you’re a fox lover and this is a wolf topic but… please help us out xD

Any idea how to get these last 2 wolves?

So after a bit of googling, I found this:

This is one of the wolves for the achievement, with epic rarity

Comparing the names from achievement and mount:

Should be the same one

Now, if I look at the wolf again and check where it drops

Those are two dungeons. Nice! Almost there. Just need to check where that dungeon is located in- Screenshot_454774×663 61.6 KB
You need some kind of entrance ticket and Level 50 to enter this dungeon, and the tamed red wolf is a possible reward out of that dungeon.

But wait, a dungeon in Glass Lotus Lake? Screenshot_453634×669 249 KB
But nothing is there in our version.
I dont know if the two wolves have other drop locations, I am also missing the last two for the achievement. But I have a bad feeling that it is some legacy stuff, no longer available but they did not adjust the achievement?

Correct, is a rare drop from golden gates.

that’s not a wolf man, that’s a cerberus LOL